It may come as a surprise to some, but oxygen itself is not flammable. Rather, it is the presence of oxygen that allows fuels to burn if there is also enough heat. This combination of oxygen, fuel and heat makes up the well-known “combustion triangle” that illustrates the three factors that must be present for a fire to burn. Most of us learned about this in the context of a burning candle or campfire. However, very few realize that in some situations, a few milligrams of debris can be enough to start a fire. And even fewer realize that if the temperatures are hot enough, even stainless steel can become fuel. 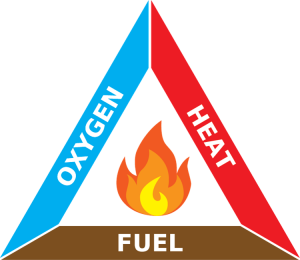 It is not an exaggeration to say that fires in oxygen-enriched environments can quickly become catastrophic. The 1967 Apollo 1 capsule fire is perhaps the most infamous example. In that tragedy, it is believed that a relatively small spark served as the ignition source and the pure oxygen environment within the capsule increased the flammability of materials used throughout the cabin. But even in less exotic settings, the removal of contamination from oxygen delivery systems or oxygen-enriched environments is a priority regardless of industry or application. Because of the serious nature of the threat posed by oxygen fires, both ASTM International and the Compressed Gas Association (CGA) have published guidelines outlining best practices for properly cleaning equipment and areas used with high concentrations of oxygen.

ASTM’s publication, ASTM G93/G93M-19, is entitled “Standard Practice for Cleaning Methods and Cleanliness Levels for Material and Equipment Used in Oxygen-Enriched Environments” and is directed at a broad range of industries. The CGA’s document has a more succinct title, “CGA G-4.1, Cleaning of Equipment for Oxygen Service,” and has a narrower audience, primarily the medical field and gas suppliers. Despite the differing focus, both documents detail the need to precision clean systems and areas containing pure O2 or those operating with pressurized O2.  At sufficient pressure, even the mix of 21% oxygen and 78% nitrogen used for breathing can sustain combustion once a fuel source has been ignited.

Non-volatile residues are frequently the fuel source for oxygen fires. These materials can be liquid or solid and most often have a high carbon content. In some cases, even metal particulates or other sources lacking carbon can serve as the initial fuel for a fire under specific conditions. It doesn’t take much non-volatile residue to ignite, leading to a larger conflagration. A contamination level of 6.0 mg per square foot (0.1 square meter) can be enough in the right circumstances.

There is no one cause for oxygen fires that stands out from others and fuel in the form of contamination won’t ignite without something acting upon it. While a spark from damaged wiring is the likely culprit in the Apollo 1 tragedy, the normal function of a system can also lead to a fire. When gas is compressed, it generates heat. If that heat is not dispersed fast enough, it can spike, causing any present non-volatile residue to ignite in a process called adiabatic compression. Similarly, suppose a pipe system has a sharp bend, and a loose piece of contamination strikes the surface with enough kinetic energy. In that case, it too can create enough heat to cause ignition in a pure oxygen environment.

Regardless of the cause for ignition, the elevated level of oxygen can turn an otherwise small flame into an intense inferno in no time. At extreme temperatures, just about anything can become a fuel source. The non-volatile residue serves as the kindling, generating enough heat to ignite nearby rubber gaskets, for example. If a fire gets hot enough and the velocity of the oxygen flow is high, even stainless steel can burn.

Both ASTM G93/G93M-19 and CGA G-4.1 go into great detail to describe the nature and severity of the risk. Similarly, both identify the solution as precision cleaning. Because of the differing natures of the systems that face the risk of oxygen fires, no single method can be applied as a common solution. There are several aqueous and solvent-based cleaning methods called out in both sets of guidelines. Additionally, both documents detail the advantages and disadvantages of various methods. Environmental concerns have added to the complexity, requiring the need to develop eco-friendly alternative solutions that still achieve the intended results.

Acknowledging the differences in systems that may have identical purposes, the standards allow for a level of interpretation. Saying that a system “requires cleaning per CGA G-4.1 or ASTM G93” is insufficient and surprisingly un-specific. A reputable precision cleaner will work with the system owner to: define the cleanliness standard, determine what the contamination is, and determine the material, substrate, finish and other aspects of the component to be cleaned. This “Cleaning Triangle” will give the information needed regarding the combination of operating conditions and application as well as the pressure, temperature, concentration and volume of the oxygen-enriched gas moving within the system. Only then can the best cleaning method be determined. Failure to get these answers can result in an insufficient cleaning or the wrong type of cleaning. In the worst case, the process can set up conditions for an oxygen fire.

Systems with relatively low pressure and concentrations of oxygen may be safely cleaned for oxygen service without a special environment. They can be certified using qualitative visual means. However, components of systems with higher flow rates, pressures or oxygen concentrations, will require being precision cleaned and packaged within cleanrooms. Those cleanrooms must adhere to the strictest standards to prevent particulate or NVR contamination from being re-deposited on parts after precision cleaning. In most cases, an ISO 7 cleanroom (Class 10,000) will meet the needs, with no contaminants larger than 0.5µm present. But there are always cases where even more stringent measures are required.

Once cleaned, the components must be protected against recontamination with specific packaging materials and processes. Installing oxygen cleaned system components in non-clean environments can present significant challenges.  Such reassembly is ideally performed under carefully controlled environmental conditions. Over the years, Astro Pak’s engineers and technicians have worked through a multitude of challenging field installations and have developed a deep understanding of the requirements and processes that allow even large installations outdoors under less-than-optimal conditions to maintain the target cleanliness levels, ensuring safe operation.

Because of the wide range of factors determining the proper method of cleaning a particular system, partnering with the right provider is critical. Owners need to rely on the experience and analysis of the vendor providing the service to identify the determining factors, perform the process correctly and achieve the desired results.  Astro Pak is very familiar with both ASTM G93/G93M-19 and CGA G-4.1 – even being referenced in the latter guide. Over the past 60 years, Astro Pak technicians have processed equipment ranging from small filters for ventilators up to large diameter piping and valves for liquid oxygen delivery systems serving the launch pads at Kennedy Space Center, giving them a depth of knowledge unmatched in industry.

Jonathan serves as the Vice President of Operations – Cleanroom Services and as a member of the company’s Senior Leadership Team. He has over a decade of leadership experience in the precision cleaning sector as well as a strong background in manufacturing management. As both a business and technical leader, Jonathan focuses on providing customers with solutions to the most demanding cleaning challenges. Jonathan is a veteran of the United States Navy where he served in Surface Warfare and Mine Countermeasures. He is also an active member of the AIAA (American Institute of Aeronautics and Astronautics) and holds a Lean/Six Sigma Black Belt certification.